One of the Douro Valley’s finest vineyards, Bomfim is the heart of the company’s greatest Ports, having provided the main structure for Dow’s Vintages since it was acquired in 1896. The property is situated in the centre of the best wine-producing area, known as the ‘Cima Corgo’, which offers an ideal balance between the relatively wet ‘Baixo Corgo’ to the west (with sometimes excessively rich soils for the production of great Port) and the intense heat of the ‘Douro Superior’ to the east. The area was well known to Dow’s as prior to purchasing Bomfim; the firm had traditionally purchased the production of some of the finest quintas in the vicinity.

Bomfim is a classic ‘River Quinta’ with many natural advantages: it is south-facing ensuring ample exposure to the sun; its stony schist soil affords excellent drainage allowing water to reach the vines’ deep roots; the annual rainfall is near perfect at 800mm (15 year annual average); the altitude ranges from 120 to 340 metres above sea level, accommodating both gentle gradients lower down and progressively steeper slopes higher up the valley side, as well as offering a variety of aspects. A further advantage is the consistency of the climate, blessed with a favourable combination of temperate and Mediterranean influences, respectively from Portugal’s Atlantic coast and the Spanish hinterland.

The whole Bomfim vineyard is ‘A-rated’, the highest quality grading conferred by the region’s wine regulatory body. The vineyards are now almost entirely planted in varietal batches, meaning each variety may be picked and subsequently vinified separately, thus allowing for each grape’s maximum potential to be tapped. The principal grape varieties planted are: Touriga Franca, Touriga Nacional, Tinta Barroca, Tinta Roriz and old mixed vines. Two-thirds of the vineyard is now over 20 years old, whilst one third is between 30 to 40 years old.

Winemaking: Bomfim’s wines are vinified on site in the quinta’s fermentation vats which have been successively upgraded and which continue to produce excellent wines. Selected batches of wines are made at Dow’s modern facility, Quinta do Sol, just a short distance downstream where the prototypes of the revolutionary robotic lagares were first trialled in 1998 and 1999.

Field research and development: advanced vinification practices amount to nothing without careful attention to viticulture and for this very reason, Dow’s employs a full-time viticulturist. One of his primary tasks is to conduct field experiments to assess such aspects as trellising systems, suitability of specific grape varieties, among several others. One of the principal areas under study at Bomfim is the matching of appropriate canopy management techniques to the grape variety and location. Accordingly, parcels of vineyards at the quinta contain six different trellising systems to monitor their performance under Douro conditions, using local varieties.

Rigorous fruit analysis is carried out every year, comparative micro-vinifications being conducted in a dedicated winemaking facility at Quinta do Sol. The underlying objective is always to strive for maximum quality and that this may be reflected in the excellence of the Dow’s Ports in the bottle.

Quinta do Bomfim: 1896 – 1996
In the Quinta’s Centenary year - 1996, Dow’s produced a superb single - quinta Vintage Port from Quinta do Bomfim. This wine has received wide critical acclaim, most notably a Gold Medal at the International Wine Challenge (London, 2005).

George Warre’s entry into the Bomfim visitors’ book dated October 5th, 1899 (the very year the above picture was taken) recounts a curious episode:
‘Being the “Peste Bubónica” (Bubonic Plague) in Porto, nobody was allowed to leave the city and the vintage at Zimbro, Bomfim and Senhora da Ribeira commenced and was practically finished when we arrived...’ 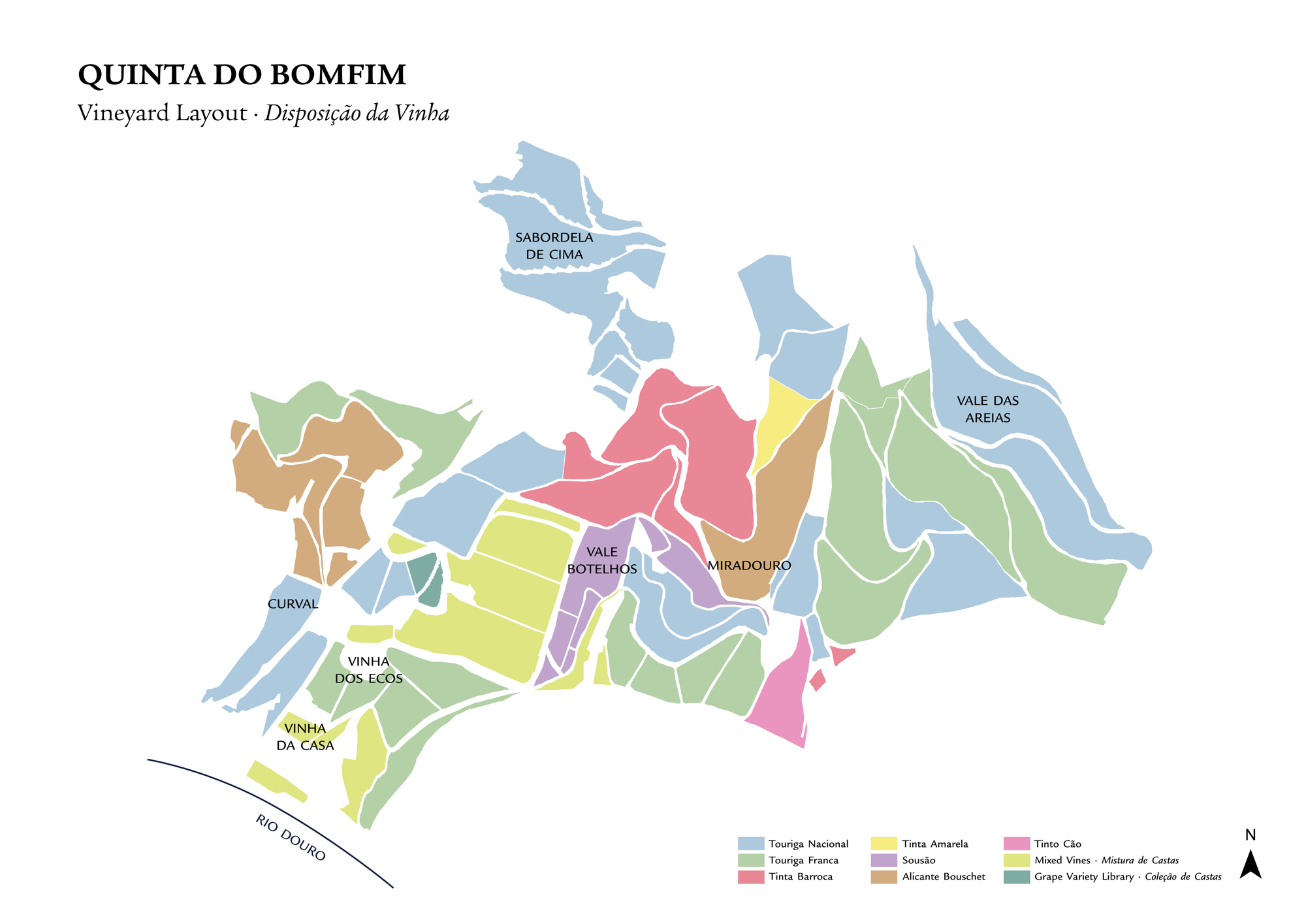